It was the spring of 2015, and if you didn’t know any better, you might suspect they were marketing course junkies. But that just wasn’t so with Carlos and Gina.

They first met in a Facebook group associated with a course they were taking on email list building. Carlos helped Gina solve a tech issue affecting her website, and Gina predicted Carlos’s recent layoff from a technology company would turn out to be a good thing.

That was the start of a journey that would not only lead Carlos to enroll in a new Leadpages course but unite them together as enthusiastic cohorts of conversion marketing success.

Finding answers to better outcomes was something they both desired...

“I was trying to sell ebooks online and it was like crickets. I became obsessed with the question, ‘How do you get people to take action on your website?’” - Carlos Aguilar

“Sales of my online course, ‘30 Days or Less to Freelance Writing Success’ weren’t horrible, but I knew they could be better.” - Gina Horkey

Challenge: What Does it Take to Grow a Business Online?

It was the fall of 2015 when Carlos took his first leap of faith. He went from a corporate job involved with enterprise resource planning and implementation to trying to sell a couple of ebooks online.

Carlos did what any bright entrepreneur would do: take something you’ve learned, package it as a useful playbook, and put it up for sale on the Internet. The problem, he would come to realize, wasn’t the actual content. The problem was with the techniques (or lack thereof) he was using to attract, then convert visitors into leads and buyers.

That’s when Gina came into the picture with her own set of challenges - and a soon to be discovered opportunity that would eventually address both their online marketing issues.

While attending Converted 2015, Leadpages inaugural marketing conference, she learned of a new training program and sent this text to Carlos:

“Hey, Leadpages just announced a training program for conversion marketing certification. You need to get in on this!”

It was a decision Gina wholeheartedly endorsed:

“I think it was a really great decision, both from a learning standpoint in the great material and conversion techniques you guys have to offer, but then also for networking and gaining potential clients, too.”

And Carlos, already a customer and witness to Leadpages growth, agreed:

Despite lackluster ebook sales, Carlos was no stranger to conversion optimization. He closely followed Peep Laja’s blog and became a Certified Optimizer from ConversionXL.

But something was missing.

“I knew about conversion optimization, but I discovered it takes more than that. I was just getting a piece of the pie. With Leadpages and the conversion marketing lifecycle, I’m now going to get the rest of the pie and see how everything ties in.”

“For me, personally, on my website,” said Carlos, “I was doing blogging, but I wasn’t doing it with any sort of focus. Once I started getting into these lessons that talked about keywords, message maps, states of awareness and creating corresponding strategic content through my editorial calendar then I knew: ‘okay - I’ve got to do this differently and take exactly what you guys have taught me and apply it.’”

And he did. Learning and applying owned media blogging tactics for converting Internet browsers into website visitors, Carlos significantly increased traffic to his website. But not just any traffic. “I was attracting quality visitors to my site, instead of just some random person who came to check out a blog post,” Carlos said.

Armed with a new set of conversion marketing techniques, and having experienced success with his own blog, Carlos began to see what he could do for his clients’ websites, too.

And one of his first clients to benefit from what he’d learned was of course Gina Horkey. By now, Carlos had a pretty good idea what the missing piece was to increase sales of her online freelance writing course, and he was excited to tell her about it.

Before taking the course, Carlos primarily focused on optimization - a piece of the overall marketing pie. But in taking a more holistic approach using conversion marketing techniques, he was able to better see what was missing, then apply the best solution to generate the desired results.

In Gina’s case, the missing piece was two-fold. First, her freelance writing course was being offered for sale without giving prospects a free slice they could sample (what is often referred to as a lead magnet in conversion marketing). And secondly, without visitors opting in to taste what she had to offer there was no way to nurture them to become buyers and customers of her full-blown course.

“The idea came to me and I proposed it to Gina: ‘Hey, instead of just promoting your course and trying to get people to buy it all the time, why don’t we give them a condensed version of it through email?’”

Gina agreed, and with Carlos’s help, they transformed lackluster sales into a highly successful marketing campaign with increased conversions. A Leadpages landing page was set up where prospects could sign up for the free email course - a tasty slice of the overall product she had been trying to sell.

During and at the end of the free email lessons a call-to-action was given so that leads could now purchase the full-blown version of Gina’s course.

While interviewing Carlos for this story he said, ‘If you talk to Gina, I guarantee she’ll tell you that doing a free course is one of the best decisions she’s made for her business.”

We did talk to Gina and this is what she said: “Carlos can attribute all of his business success to me. That’s what it really comes down to.”

Truly a partnership made in conversion marketing utopia!

It didn’t end there. Carlos and Gina went on to launch a new campaign involving a Virtual Assistant (VA) course Gina developed. It too converted at over 29%.

Following these endeavors, Carlos and Gina decided to take another leap of faith and form a strategic partnership. It was to jointly develop and market a brand new course called, The Course Course - a course on how to launch courses. A fitting product given their successful track record!

...and Spread Some More

Carlos not only found the missing pieces to boost sales of Gina’s courses and launch a joint venture with her, he also found ways of helping other businesses succeed with conversion marketing.

A Salt Lake City auto recycler was averaging 350 leads a month for the first four months of the year with AdWords. Carlos took a look at what they were doing and then applied paid media strategies from the conversion marketing course. The result? Conversions doubled to an average of 722 per month the following four months - a 106% increase!

They were head-over-heels happy with the dramatic increase in leads. So much so that, according to Carlos, success yielded some unexpected benefits:

“Their people were working overtime. The business owner told me that they were putting their competitors out of business down the road because they couldn’t keep up.”

There seems to be a theme between these success stories: If something’s not working the way you’d like, learn then apply some strategic conversion marketing techniques for better outcomes:

“Don’t get discouraged just because your first launch or effort wasn’t as good or something didn’t work out as you had expected it to work out. Don’t give up and don’t just focus on one thing, but take a look at the whole conversion marketing lifecycle - find what’s missing and the rest of the picture will come into much sharper focus.” - Carlos Aguilar, Conversion Surge

That, and take a page out of Carlos’s and Gina’s success story: don’t be afraid to take a leap of faith with a business partner you know, like and trust. Who knows, it just may be the start of something truly great.

“The great thing about partnering on projects with people you get along with really well and trust to pull their own weight is that you don’t have to do it all yourself.” - Gina Horkey, Horkey Handbook

Back to All Success Stories 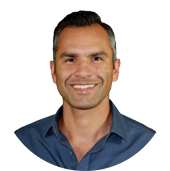 “Don’t get discouraged just because your first launch or effort didn’t work out as you had expected it to work out. Don’t give up and don’t just focus on one thing, but take a look at the whole conversion marketing lifecycle - find what’s missing and the rest of the picture will come into much sharper focus.” 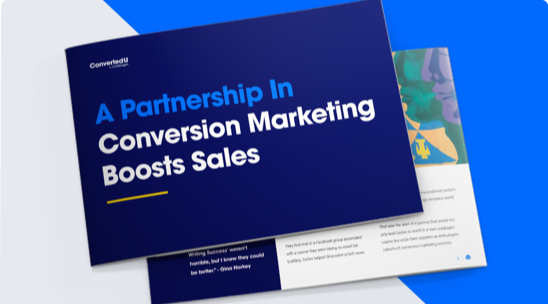 Download and get inspired by an enhanced version of this Conversion Marketing Success Story in PDF format.

Ready to Write Your Own Conversion Marketing Success Story?